2. Figures show some equipotential lines distributed in space. A charged object is moved from point A to point B. [NCERT Exemplar] 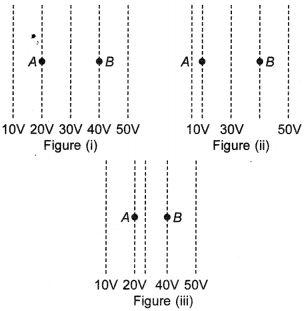 3. Equipotentials at a great distance from a collection of charges whose total sum is not zero are approximately [NCERT Exemplar]
(a) spheres
(b) planes
(c) paraboloids
(d) ellipsoids

11 v Figure shows the electric lines of force emerging from a charged body. If the electric field at A and B are EA and EB respectively and if the displacement between A and B is r then

16. A parallel plate condenser is connected with the terminals of a battery. The distance between the plates is 6mm. If a glass plate (dielectric constant K = 9) of 4.5 mm is introduced between them, then the capacity will become
(a) 2 times.
(b) the same.
(c) 3 times.
(d) 4 times.

17. Three charges Q, +q and +q are placed at the vertices of an equilateral triangle of side l as shown in the figure. If the net electrostatic energy of the system is zero, then Q is equal to 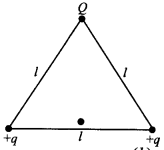 18. Two metal plates form a parallel plate capacitor. The distance between the plates is d. A metal sheet of thickness

19. Acapacitor of 4 pF is connected as shown in the circuit. The internal resistance of the battery is 0.5 Q. The amount of charge on the capacitor plates will be [NCERT Exemplar]

25. Equipotential surfaces
(a) are closer in regions of large electric fields compared to regions of lower electric fields.
(b) will be more crowded near sharp edges of a conductor.
(c) will always be equally spaced.
(d) both (a) and (b) are correct.

28. An electric dipole of moment

is placed in a uniform electric field

. Then
(i) the torque on the dipole is

(ii) the potential energy of the system is

37. Two spherical conductors each of capacity C are charged to potential V and -V. These are then connected by means of a fine wire. The loss of energy is
(a) zero
(b)

Download our all new app for latest notes and useful assignments.

One App For All Your Needs.

Gurukul for JEE & NEET (Set up & Organised by IITians)

We Need Your Support!

We all are helping students with free educational resources.

Your little support can make a big difference. As little as INR 5 will help.